​"The outstanding gallantry and conspicuous daring that the American Volunteer Group combined with their unbelievable efficiency is a source of tremendous pride throughout the whole of America. The fact that they have labored under the shortages and difficulties is keenly appreciated ..." (April 1942)

When the Japanese turned their attention away from China, these brave men were given a choice. They could go back to their commissions in the Navy or Marine Corps, or they could join the Chinese air force. Some of the men choose to follow Chennault.  Others went back to their commissions in the Navy and Marine Corps. In the end the AVG was replaced by the 14th Army Air Corp/Air Force Flying Tigers.  The 14th Air Force served in China from March 1943 - December 1945.

​"They see him as savior, because he came to their aid before Pearl Harbor, before the United States starting siding with the Chinese, against the Japanese. But before 1940, the US was supplying Japan with their industrial products, oil and gas. He was a man willing to stand up to his own country and come their aid. They don’t forget that and they appreciate their history."
(Interview with Ms. Calloway)

"On visiting China, the people recognized a shirt I was wearing as Flying Tigers, they know more about the Flying Tigers than Americans.  They kept saying 'XieXie Papa'. Thank your Papa. The Tigers just did their jobs." (Interview with Ms. Fontaine)
AVG Flying Tigers Congressional Gold Medal Act 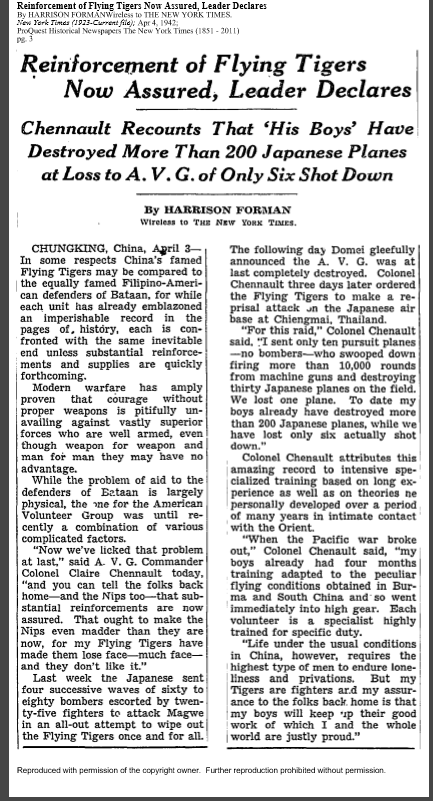