The P-40 Warhawk and It's Opponent
The P-40 Warhawk was a reliable plane, but the Nakajima KI-27 was superior. The P-40 Warhawk was rugged and had more armament than the KI-27 Nate, including four wing-mounted machine guns and two nose-mounted cannons. It also had lots of armor around the engine and the cockpit to protect the pilot. However, the P-40 Warhawk had several fatal flaws. The fighter was known to be heavy and not maneuverable. The KI-27 was fast and maneuverable, which made it a more effective dogfighter. With its two 13 millimeter guns, the KI-27 proved itself to be a formidable opponent. The KI-27 was not without it's Achilles' heel, either. The KI-27 had fixed landing gear and a serious lack of armor. This left the landing gear exposed to ammunition and made the pilot vulnerable. (Dogfights, 2014) 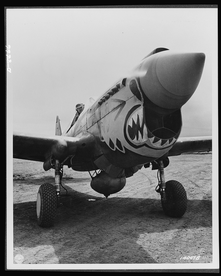 Courtesy of the National Archives. One of the redoubled "Flying Tigers" ready to take off from an Alaskan point in a Curtis P-40 "Warhawk" fighter plane
"Planes were a tough problem. China had been a long-time, profitable customer for Curtiss-Wright, so my old friend, Burdette Wright, Curtiss Vice-President, came up with a proposition. They had six assembly lines turning out P-40's for the British, who had taken over a French order after the fall of France. If the British would waive their priority on 100 P-40B's then rolling off one line, Curtiss would add a seventh assembly line and make 100 later-model P-40's for the British. The British were glad to exchange the P-40B for a model more suitable for combat." [Chennault]

"The P-40B was not equipped with a gun sight, bomb rack or provisions for attaching auxiliary fuel tanks to the wing or belly. Much of our effort during training and combat was devoted to makeshift attempts to remedy these deficiencies. The combat record of the First American Volunteer Group in China is even more remarkable because its pilots were aiming their guns through a crude, homemade, ring-and-post gun sight instead of the more accurate optical sights used by the Air Corps and the Royal Air Force." [Chennault]
Copyright