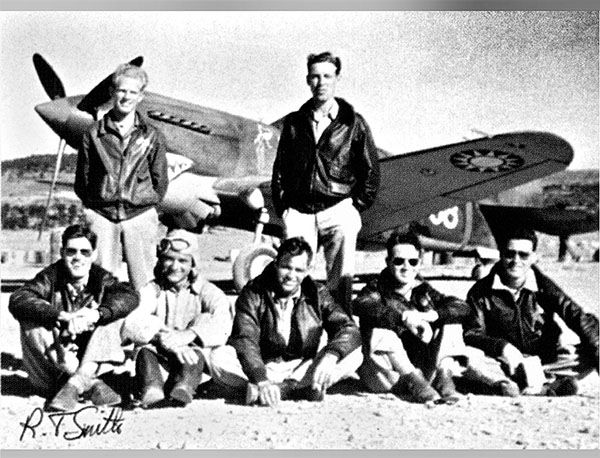 "Personnel proved a tougher nut to crack. The military were violently opposed to the whole idea of American volunteers in China. Lauchlin Currie and I went to see General Arnold in April of 1941. He was 100% opposed to the project. In the Navy, Rear Admiral Jack Towers, then Chief of the Bureau of Aeronautics and later Commander of the Navy's Pacific Air Forces also viewed the A.V.G. as a threat to his expansion program. .... It took direct personal intervention from President Roosevelt to pry the pilots and ground crews from the Army and Navy. On April 15, 1941, an unpublished executive order went out under his signature, authorizing reserve officer and enlisted men to resign from the Army Air Corps, Naval and Marine air services for the purpose of joining the American Volunteer Group in China. Orders went out to all military air fields, signed by Secretary Knox and General Arnold, authorizing bearers of certain letters freedom of the post, including permission to talk with all personnel ..."

​ In the spring of 1941, Chennault returned to the United States to obtain planes and pilots for the American Volunteer group in China. The AVG was comprised of 87 pilots, 300 ground crew and 100 planes.

​​​"The American volunteer group were recruited via the newspaper in a way that was underhanded. They would recruit for plumbers, electricians, carpenters, accountants, and farmers, to go to China to help China bring their economy about. When in reality, they were military officers in our military. They were Navy, Army, or Marine Corps pilots. There were 87 of them. They had 1 year contracts. This was by Presidential proclamation, but it was kept very quiet." (Interview with Mrs. Fontaine)

​"AVG disbanded then each of the pilots were offered a position in the 14th Air Force Flying Tigers. Some of them like Pappy Boyington in the Black Sheep Squadron, he left the AVG and went back to the Marine Corps, got his commission back, went to the South Pacific to fly P-40s with his own group Black Sheep Squadron."
​(Interview with Mrs. Fontaine) 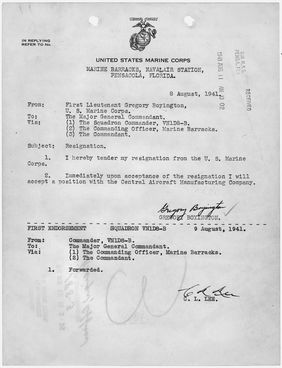 Letter of resignation from the U.S Marine Corps, to accept a position with the Central Aircraft Manufacturing Company. This" company" was a cover organization for the American Volunteer Group ("Flying Tigers") in order to circumvent various laws regarding Americans serving as mercenaries. ​​Photo from National Archives
" . . . Their offer was a one-year contract with CAMCO (Central Aircraft Manufacturing Company) to 'manufacture, repair and operate aircraft at salaries ranging from $250 to $750 a month. Traveling expenses, 30 days leave with pay, quarters, and $30 additional for rations were specified. They would be subject to summary dismissal by written notice for insubordination, habitual use of drugs or alcohol, illness not incurred in line of duty, malingering, and revealing confidential information. Before the end of the A.V.G., I had to dismiss at least one man for every cause except revealing confidential information. A system of fines was initiated for minor offences."
​(Flying Tigers Association Website)

"There was not mention in the contract of a $500-bonus for every Japanese plane destroyed. Volunteers were told simply that there was a rumor that the Chinese government would pay $500 for each confirmed Jap plane. They could take the rumor for what it was worth. It turned out to be worth exactly $500 per plane. Although initially the five-hundred-dollar-bonus was paid for confirmed planes destroyed in air combat only, the bonus was soon applied to planes destroyed on the ground - if they could be confirmed."
​​(Flying Tigers Association Website) ​